The genetic heritage of each individual (about 30,000 genes) is contained in the cells mainly within the nucleus. ¬†The nucleus contains the 46 chromosomes which are characteristic of the human being, including the sexual chromosomes ( Y and X). This DNA, which¬† is called nuclear, is present in the cell in only one copy. However, a portion of the genetic heritage is also present outside the nucleus contained¬† within the mitochondria. Mitochondrial DNA,¬†¬† unlike nuclear DNA, is present in many copies within each cell.¬†The total DNA (nuclear and mitochondrial) is composed of the same fundamental chemical units, the nucleotides. They can incorporate one of the four chemical nitrogenous bases (adenine, thymine, cytosine and guanine) which alternate along two filaments that are wrapped in the characteristic double helix.¬†¬†As is well known, the genetic heritage of each individual is transmitted from one generation to another through the mechanisms of genetic inheritance . The nuclear DNA is transmitted by parents in equal parts according to Mendel‚Äôs laws. However, the Y-chromosome and mitochondrial DNA¬† are inherited in a different manner as shown in the figure below. 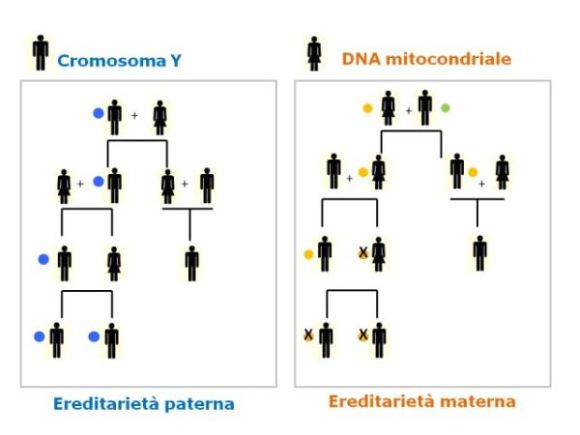 The Y-chromosome is present only in males and it is transmitted from father to sons. Differently, the mitochondrial DNA is present both in males and females, but it is transmitted exclusively from the mother.¬†¬†They have a¬† ‚Äúunilinear‚ÄĚ transmission type. In fact, they are inherited¬† from only one parent. They are transmitted unaltered from one generation to another until there is a casual change or genetic mutation (denoted by a tick in the upper figure on the right).¬†This consists in a chemical transformation of one chemical nitrogenous base to another (e.g. from adenine to guanine). As a consequence of their transmission mechanism, the Y-chromosome can provide us with information about male history while the mitochondrial DNA gives information concerning the female.¬†Differently from the nuclear genes, both mitochondrial DNA and the Y-chromosome (only its non recombinant part) are not subject to genetic recombination processes. This characteristic means the unilinear¬† markers are suitable for defining haplotypes which have a set of specific mutations that have accumulated along the maternal¬† and paternal lines and that are inherited as a complete set. Moreover, mitochondrial DNA is characterized by a higher mutation rate¬† compared to the average nuclear rate (10 to 20 times higher). Its¬†sequence variation is generated along the maternal lineages only because¬† of¬†the sequential accumulation of new mutations . This makes mtDNA a molecular archive of the history and migration of women.¬†Some specific mutations of¬† the Y-chromosome and mtDNA define particular lineages¬† called haplogroups. They are composed of a set of evolutionarily related haplotypes and are specifically distributed around the world. For example, some of them are mainly found in European populations while others are found in African populations.¬† 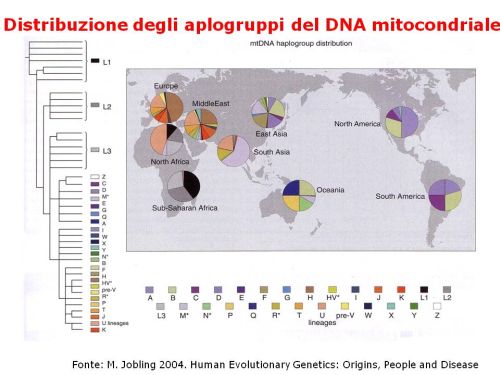 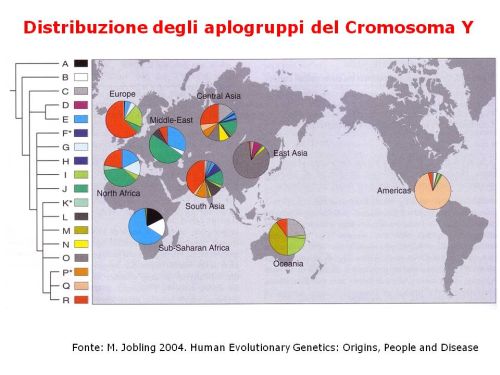 Moreover, since these mutations occur with a given frequency in time, it is possible to estimate the age of the haplogroups.¬†For this reason, haplogroups are used as markers of human migration. Through the study of their variability and their spatial and temporal distribution,¬† it was possible to trace the most important phases of colonization of the continents by anatomically modern man.¬†For example, paleontological and genetic evidence, mainly from the study of mitochondrial DNA,¬† has made it possible to establish that anatomically modern Humans (modern man) evolved from the arcaic Homo Sapiens¬† exclusively in Africa between 200,000 and 150,000 years ago.¬†Some members of this main branch later (70.000 to 60.000 years ago) emigrated from the African continent (Out of Africa) and replaced the previous archaic forms of Homo, such as Neanderthals and Homo erectus, without probably mixing with them.